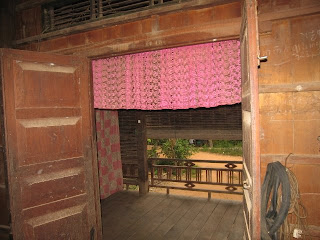 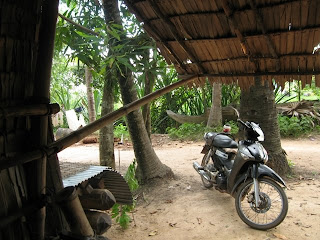 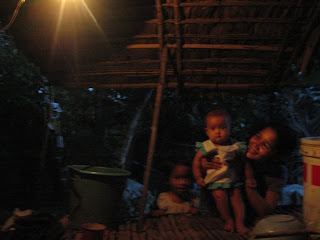 The neighbor's baby, whose name is pronounced "Lee Na" 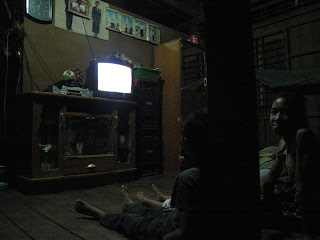 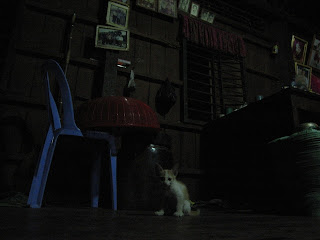 Yesterday I met up with my old tuk-tuk driver (a tuk-tuk is like a motorcycle rickshaw) from when the three of us went to Angkor Wat. He, Mr. Meth, took me to his family's house to eat dinner and then out to drink. I met his mother, who is a nun, and was primed beforehand on how to greet her in Khmer and wai to her. His family makes extra money off of a betel nut plantation behind their house. It's a lot of boiling and peeling then slicing before you can chew the soft insides, which have huge amounts of caffeine and work as an appetite suppressant. Chewing it is not although unpleasant.

Being the only white guy in the village, the locals came to say hello, the children practiced their English and I ate more than once. The night was cool, the palms swayed and the hum of prayer and conversation came in from nearby homes.
at 1:18 PM 2 comments: 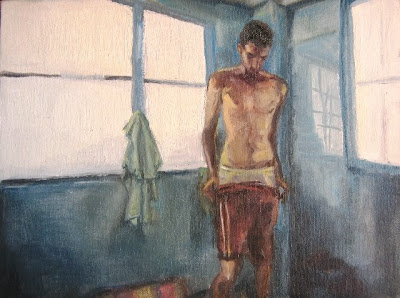 Back in Cambodia.
So I'm back in Siem Reap, Cambodia to see more of the Angkor Temple complex and some of the surrounding villages. The city itself is a tourist town with lots of comforts and I'm around a 10 minute walk outside of it. It's the wealthest area in Cambodia, I'm supposing, which is still not saying much, but doesn't feel as sad as other parts of the country.
I'm near the French cultural institue and some NGO schools and groups. It's great to see kids leaving class and their moms and dads picking them up on motorbikes and zipping back to their wooden houses on stilts. It's still so completely traditional here; women wear sarong and carry baskets of baguette (former French colony...) on their heads while the men work the fields. 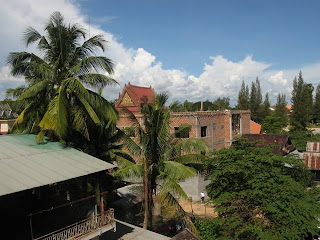 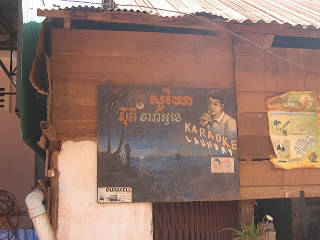 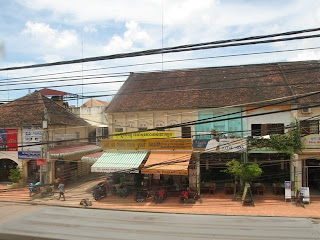 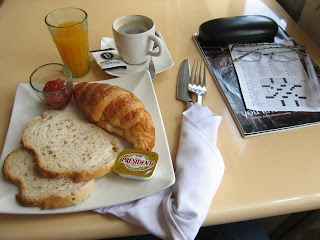 Breakfast and crosswords at The Blue Pumpkin 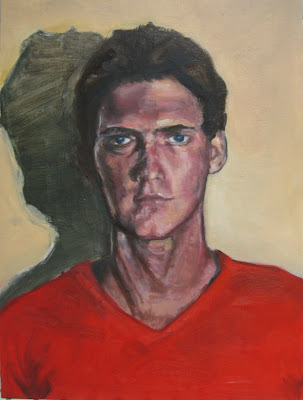 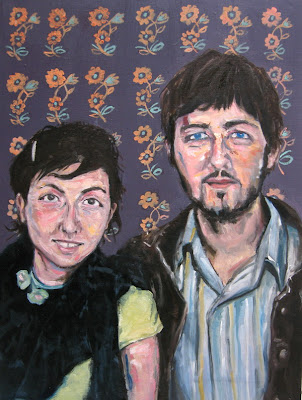 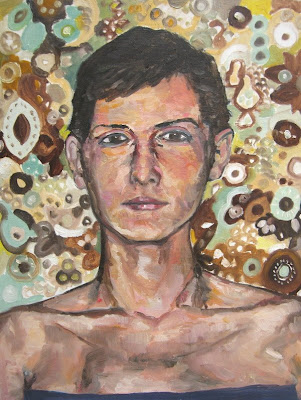 (Again, forgive the quality problems if they exist. The middle painting might have a high contrast issue due to the poor quality of the monitor I'm working with.)

The first is a picture of my father in an art school ID photograph. The second is a highly embellished copy of a photo booth picture. I've been into this idea of decoration and patterning, and so I added some to the background of Silvia's image, which I think improves it immeasurably. There is something vital and fun about it now, more explosive.

I'm working a lot on repainting the portrait of Ariel in a more stoic, expressionless kind of face study way. It reminds me of a folky painting of an American GI in Japan during the occupation that I once had hanging in my room in Miami. Here are the results so far. 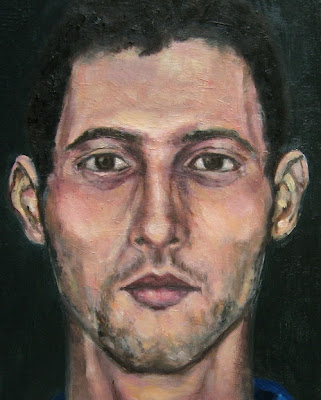 detail of Ariel
~~~
I painted the background in a deep, hunter green, which is nearly impossible to tell on this monitor display since it appears both too contrasty and dark. (I need a calibrated monitor or a mac!) I enjoy trying completely new ways of painting, even at the risk that I won't have a specifically signature style. I'm thinking of adding a tight, patterned background to this one as well, but I'm going to shelf it for a little while. 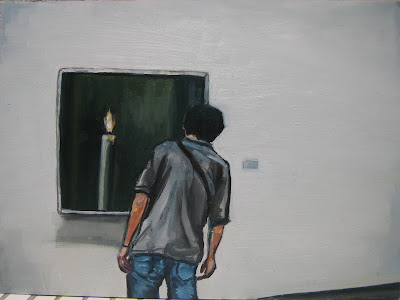 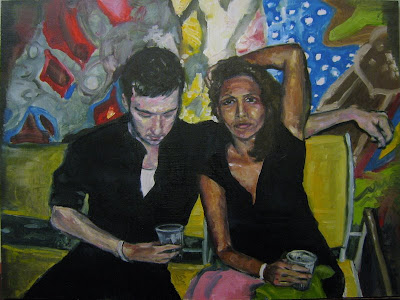 Isa buys me a drink 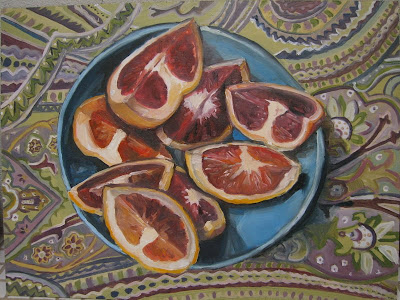 Some paintings I've finished over the past few days. I'm going to do a few portraits since I have a few new passport and ID photos to work from. Also I can flesh them out more satisfyingly and less aggravatingly.

The middle one may need work. It's, by far, the most worked of the three. My limbs are jaundiced, but I need to let this painting sit for a while. The "flash" effect is in the painting itself and not a result of my digital camera. 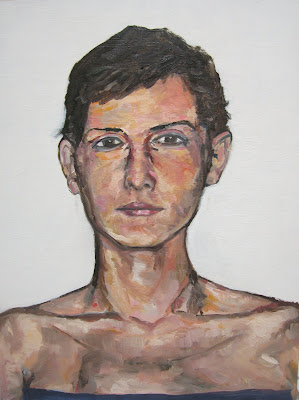 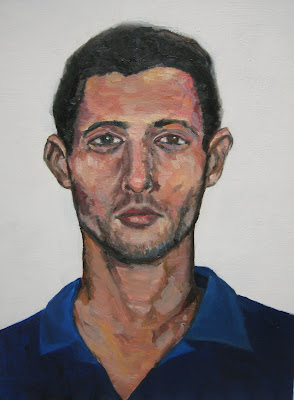 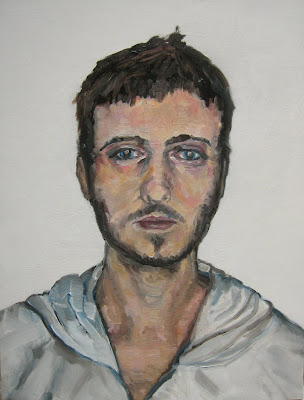 Silvia, Ariel, Ross/ 12"x15"/ oil on wood.
*The color is off in the photos; it's displaying much too blue on this computer. Note that the background should be bright white.

I had only these three passport pictures hidden away in my navy Japanese wallet that Cat gave me. If you'd like a portrait, scan and e-mail me a passport photo to paint from. I'm going to work on different subjects for a few days and will return to the portraits if I recieve jpegs. 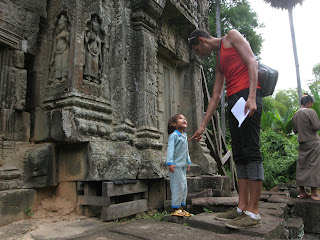 "What is YOUR name?" 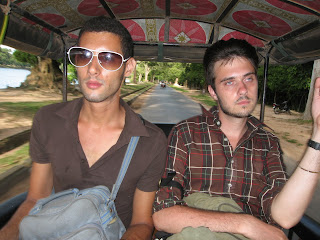 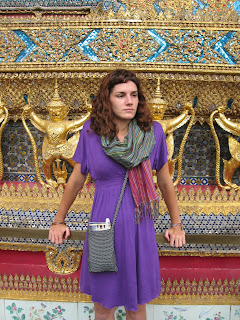 Silvia at the Grand Palace 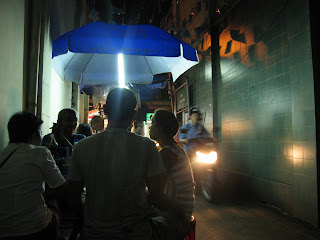 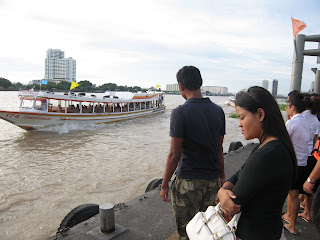 I'm looking into attending Chinese classes in Beijing, starting in September. If I'm frugal in Thailand, I should be able to cover the costs of a semester at a smaller school, NOT the woefully overpriced state-run Beijing Language and Culture University. The visa situation is laughable right now; the Chinese government isn't even issuing student visas until after the Olympic games at all. Can you imagine a country shutting down it's universities and schools to foreign students?


And, I continue to be in Bangkok. I feel very restless, but I hope to gather something from this period of time painting and reading. I need to grow into being alone for a while. In ways, this is the city for transition periods. It's incredibly inexpensive, there are a lot of resources for just about everything, the food is great and plentiful, it's not too hot and pleasantly rainy, it's totally visa free for a month and it's relatively easy to get around. My hostel is right next to the National Gallery, so I think I'll pay it a visit tomorrow.
at 2:45 PM 2 comments:

This city is amazing. The food is positively the best I've had; consistently delicious and varied and I'm eating extremely well. Yesterday I walked to the riverside and ended up finding a long, winding amulet market near a major Buddhist wat selling hand painted protection charms, ceremonial wooden foot massagers and vials of strong scented soap. A short walk yields immedite results; no more nightclubs, Burger Kings and overpriced t-shirts. I bought a few painting supplies across from the very 19th century European/Thai designed Slipakorn Art School and stayed up last night making a self-portrait.

I'm now staying in a new hostel in a quieter area. It's completely Korean. A Korean owner, Korean-only signs and Korean guests. It's really pleasant and I have a spacious, very cheap room with a skylight, real light bulbs (no disgusting flourescents) and plenty of room to paint. I'm extremely happy with the new room.

Silvia and Ariel should already be in America. Write me.
at 1:16 PM 1 comment: 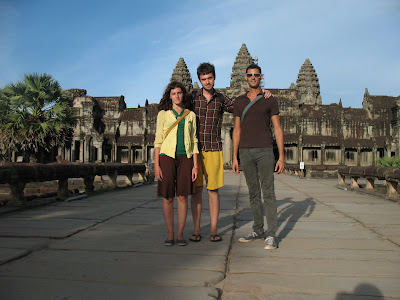 The crew is in Bangkok now, the last leg of our trip. We've been to Vietnam, Cambodia and now Thailand. We're all exhausted, especially after three days of exploring Angkor Wat. Pictures to follow.
at 10:44 AM 2 comments: