七九八 798
Ariel and I went to the 798 art district Saturday and managed to see a few nice things. Winter is good for gallery walking in Beijing, and it was nice to see small dedicated groups braving the cold.

Although I forgot the name of the space, I particularly liked these 盆景 （penjing, or bonsai in Japanese) with vices and wire mesh for trimming on display. Many of these welded metal pieces are based on the more simple bamboo and rope pieces used in Chinese bonsai farms to produce less expensive warm climate trees that can grow quickly. The work felt like it was about the imperfect finishes or leaving traces. It was a also comical, like they were receiving cosmetic surgery or little tree prisoners. Overall it was constricted and frightening and engaging. Some were dead or dying, which I'm not sure was 100% intentional. Showing living trees in a gallery space along with dead trees was surprisingly affecting.

If I find more info on this work, I'll post it.

A beautiful cappuccino and surprisingly perfect apple tart (with what tasted like an apricot jam and lemon juice glaze) at the 798 cafe.

四 川泡菜 (sichuan pickles) They fermented for a week, then we ate them. They were actually a little immature, so I'll shoot for two weeks next time.

How to
Boil 1 part unhusked, whole mung beans in about 8 parts water for a minute or so then let sit, covered for an hour. Then, reboil. Add a sizable chunk of natural rock sugar and continue to simmer until the beans have broken up in the broth. (About 45 minutes) Remove and set aside most of the beans with a slotted spoon. (You could also use a colander.) Each bowl should be mostly broth with some beans thrown in. The resulting beverage will be sweet and rich with a distinctive taste. (No need for a spoon!) Really healthy; Chinese even make this into ice cream.

This lady was in all-black, included round black frame glasses. Her shoes were non-nondescript, scuffed men's shoes in the smallest size imaginable.
at 12:54 PM No comments:

Ariel and I got glasses yesterday. He needed a new pair and I needed a pair. We did our best disinterested model gazes while Silvia photographed. At about 260RMB a pair including the prescription, we bargained pretty well.
at 12:53 PM 3 comments: 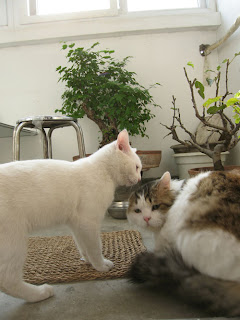 Silvia's kitty and our kitty are friends now.
at 1:55 PM No comments:

I've been reading (and cooking) from Fuchsia Dunlop's Revolutionary Chinese Cookbook since I got back to Beijing. The recipes are all from 湖南 (Hunan province) which is also Mao Tze Teng's hometown, and the writer goes into incredible depth with each dish, tying it all in to the history of late 20th century China. Real Cultural Revolution food is poverty food, along the lines of cucumber pickles, shredded radish, boiled tofu and fried seaweed. However, Dunlop mostly tackles fully traditional, hearty peasant dishes along with complex banquet food, making the recipes more reminiscent of quieter times and less placed within the historical context constraints that the title suggests. Included are even some of Mao's favorite recipes gathered from his own family.

Dunlop writes a little about the food additive MSG, mostly negatively. Monosodium glutimate is the chemical compound that produces umami, or richness, in food. This glutimate is naturally occuring in fermented foods, (parmesian cheese, miso, black bean paste) some meat, some vegetables seafood, mushrooms and sea vegetables. 50 years ago or so, chemical glutimates were developed by the Japanese and have since been added to snack foods, dashi, stir-fries and to disguise the taste of cheap food.

As we all are aware, MSG is now very present in Chinese food.

The main reason for this is because in traditional Chinese cooking stocks made from fish, seaweed, pork, chicken, beef, mushrooms, etc. are used commonly to flavor stirfries and soups with extra glutamate flavor. Villages without electricity or freezers would have to constantly keep stocks bubbling and simmering to prevent them from becoming rancid, so a cook became a slave to kitchen because of the need to constantly make and keep fresh stock. Also, if a family can't afford enough meat, there will not be enough bones for the stock. This means the other dishes suffer and won't have that umami taste. MSG is wonderful for those who cannot afford to keep stock. I heard a story told by a Chinese woman about how her mother would make boiled cabbage for lunch. They were too poor to afford real stock, so they had to just use well water. To make the simple, otherwise tasteless food palatable, the mother just added a dash of inexpensive MSG. To poor Chinese, 味精, or "flavor powder," is a miracle spice.

The negatives outweigh the positives. China's food is arguably the most complex and vast in the world, which anyone who's been to a supermarket in Beijing can agree with. You can study it for 10 years and find new dishes, ingredients and techniques everyday. This being said, traditional cooking methods have been threated for most of the late 20th century up until now. Pesticide ridden vegetables, antibiotic injected meat and processed foods are used in most restaurants and MSG is used as a cover-up in a more heinous way than a poor mother guising up her cabbage broth. I've had truly hideous food in this city, but I still believe in the potential of traditional Chinese cooking methods. Maybe I have to travel south to gain faith again.
at 12:54 PM 1 comment:

~从迈阿密到北京~
I'm back in Beijing. I came back to a very clean apartment, a very happy Ariel and wrapped presents. The jetlag was pretty bad this time. I'm still digesting the past few weeks and don't know exactly what to say. It all went by very quickly and I'm already at work, which I guess is what always happens. You can always count on routine.

Thanks to everyone for everything. I had a wonderful time in New York and Miami and hope to see you all for Christmas this year. 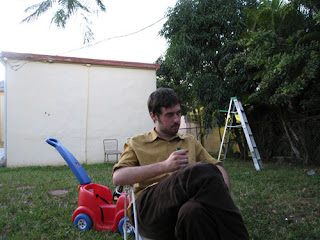 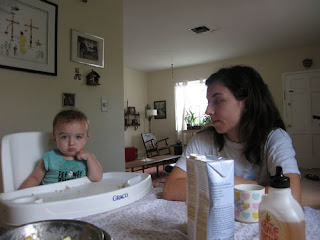 Breakfast with the family 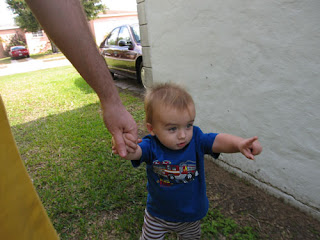 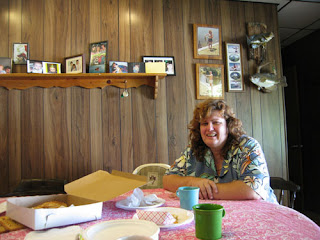 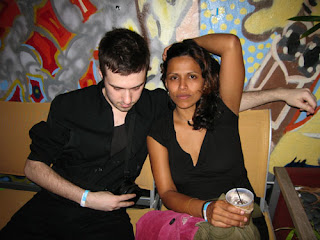 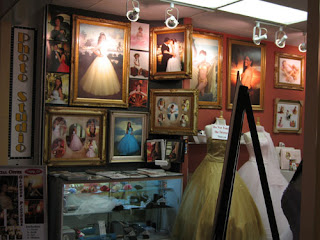 Mall of the Americas 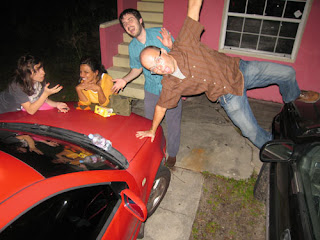 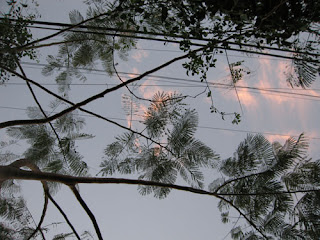 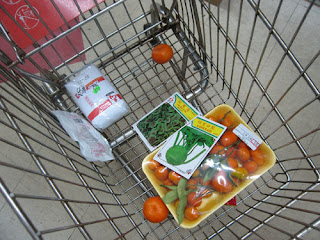 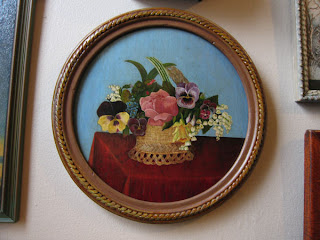 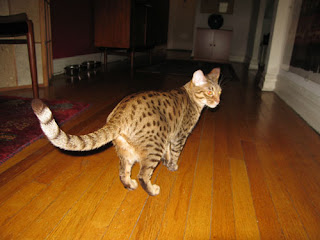 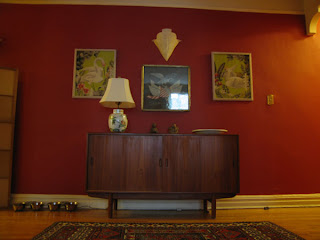 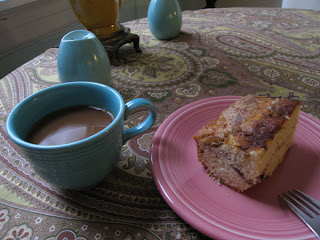 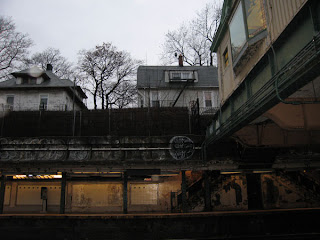 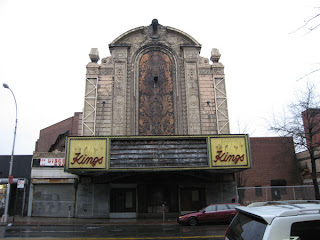 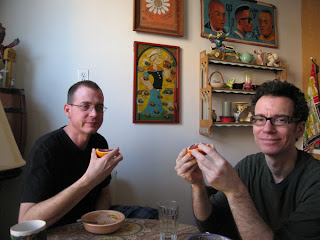 dad and Ira and blood oranges