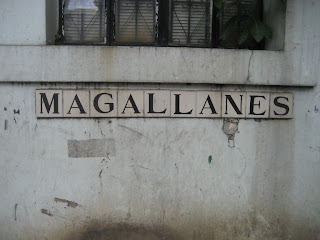 Street sign in the old quarter of Manila
-----
The Philippines.  Wonderful thus far.


Ariel and I are in Palawan, a jagged teardrop island southwest of the Filipino island chain.  Specifically, the tiny town of El Nido in the Bacuit Peninsula.  We're surrounded by karst formations that seem to float on hyper-tropical, bluer than blue water.  Unbelievable.  Yesterday we hired a local boat rigged with bamboo pontoons to take us island hopping.  Totally abandoned beaches, snorkeling and viewing seeing impossibly neon sea life.  In town there are no banks, ATMs, A/C, only partial electricity and no name brand anything.  Tourist shops and bars are alongside local stores selling used clothing from American junk bins and handcrafted fishing nets.  The antithesis of Beijing.


We met our friend Susu, who was also here visiting a few French friends who opened the areas only posh restaurant.  Charming and extremely popular, being that it's the only game in town besides two tucked away exclusive resorts.  Several cocktails and beaches and at least one hangover later, she's flying back to Beijing.


Manila was filled with slums and poverty unlike any place I've ever seen, but had some undeniable charms in the old Spanish quarter of Intramuros and the classy restaurant scene with lovely Filipino food and heavily made up wealthy local ladies with unscrupulous mafioso men in guayabera-like native shirts.  Our plan is to either take a rickety local boat to Manila (perhaps not) or backtrack and see more of this incredible island, before heading to norther Luzon to the UNESCO protected town of Vigan.