I got hired with a tutoring company here in Wudaokou and yesterday I met my first potential student. He was only a few years younger than me, but acted very nervous and childish. His parents literally hovered around him while I made a little small talk, then everyone left and I was expected to make this kid's acquaintance. His English was not very good, but he could read nearly everything I showed him, but couldn't understand much of what he was reading. Also, he couldn't understand my English very well at all. This is a by-product of a Chinese English education which has a heavy focus on grammar drills and spelling, but is not concrete on the actual use or meaning of the language, obviously due to a lack of native English speakers in the country. Some of the English language books I saw, especially the newer ones, were very good, so I think the educational system is starting to shift. Anyway, he wants me to come to his house (on the opposite side of town) instead of meeting at the company (which is a brief walk from my apartment) or at my apartment itself. Not so sure if it's worth it... I figure if I pick up 4-5 students, I'll be making enough money to get by.

When the hired me, the company took a terrible picture of me which they are going to put on the wall with the rest of their "foreign friends," which should be amazingly funny to see. I''m happy about this company, but I'm going to interview with another private tutoring school tomorrow. The rates are even higher at this other company; I'll be earning around the same or a little more than I did in Miami, but with Beijing prices.

So all three of us have work: Silvia is going to work for the Korean kindergarten, Saul for this local Kindergarten called "Venus," and I'm working for a couple tutoring companies, apparently, whizzing around to student's houses or the office, or, hopefully, some will be whizzing to my apartment.

Also: Went to IKEA today. We bought all sorts of homey things, but didn't spend too much money. It's SUCH a zoo, but a lot of fun to walk around in. I'm feeling better healthwise, but I gave Silvia my cold.
at 3:30 PM 1 comment: 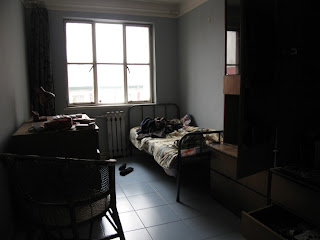 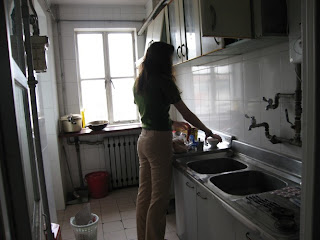 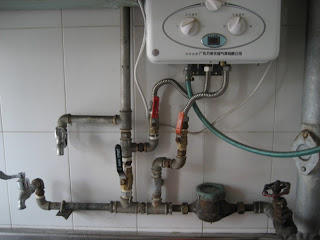 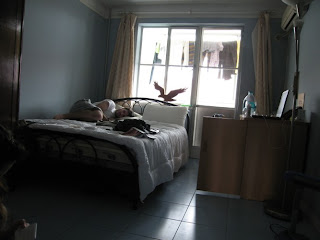 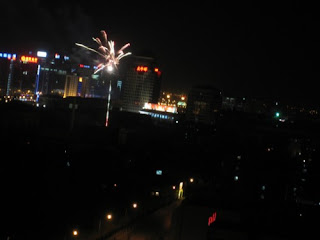 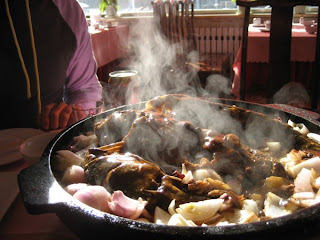 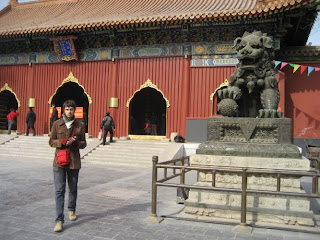 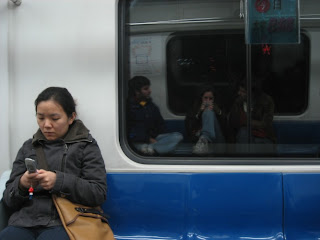 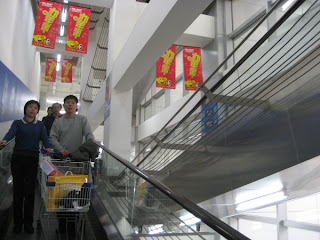 Sick... I've had a cold or flu for the past few days. I'll continue posting but in the meanwhile I'm on a steady diet of peanut butter and jelly sandwiches, Korean noodles and bootleg Sex and the City episodes. Our landlord installed some shelves and a curtain for our shower, and I've been feeling more domestic. I'm excited about our apartment... later today we are going to IKEA to get a few small house things. (Beijing's IKEA is the second biggest in the world.)

Things are slow for me on the job front, but once I'm over this cold I'll hit it whole hog. All my previous contacts are still quiet. I'm a bit worried, but...
at 12:33 PM 1 comment:

Yesterday we found an apartment! It's quite inexpensive, 3300RMB a month, with three bedrooms, two balconies, kitchen and bathroom. There is cable in the house, a fridge, excessive dressers and totally random furniture, but no sofa. It's certainly a Chinese apartment and is run down, but is considerably larger than the last apartment we saw and significantly cheaper. (The last one was 5000RMB) Our landlord seems very nice, laughs a lot and, miraculous, speaks English. Soon I'll post pictures of the place and my new address.

We had to call our last realtor and explain to him that we would call him later and didn't want to sign the contract today. With our very, very basic Chinese, this isn't easy, so it went something like this:

"I am American. Today, I am very busy. Tomorrow, I will call you, okay?"

That really was awkward, so I further explained...

"Yesterday, we went together to look at houses." I couldn't actually remember how to say remember, so it sounded slightly accusatory or at least braindead obvious. I liked this realtor, but he simply didn't have cheap apartments in a good area.

Everything is really shut down this week for new year's, so no job searching. I have some things scheduled for next week, and I'm interested in working for a private tutoring company so I have flexibility. Sunday the new work week will start up again, this city will wake up, everything will open, and I can send out some postcards and a package.
at 9:37 AM 4 comments:

Today we're headed to Wudaokou to look at apartments. We met up with this realtor yesterday and struggled with some form of communication, which was vaguely successful. He ended up marching straight to this British girl's apartment who lived in the building and translating through her, as she has been living here for seven years, speaks perfect Mandarin, and says he is the best realtor she knows of with the fairest prices. Today he is going to show us several apartments, so I'm really excited. Wudaokou is THE English teaching neighborhood, and most schools are located here.

Also, I might be picking up tutoring jobs and working like that for a while. I'd like to work 10 hours a week with a cram school or English prep school, then tutor another 10 hours. The pay would be even better than if I get a 40 hour teaching job with a public school. This way I could study Chinese easily and get a tutor for that, or do a language exchange and learn Chinese for free.

Two days ago, I got a cellphone with the help of this guy from Hong Kong, Pietros. He is studying Mandarin and will be here for a few more months. It was a very Chinese process to get the phone: you wait in a long line to sit at a counter where a woman asks you if you text message or call more often. Then you pick your number, which vary tremendously based on what numbers are present. (eg. Fours are very unlucky since the sound for four is the same sound for death, so numbers with many fours are cheapest.) Needless to say, I have several fours in my number. Then you get your sim card and buy a phone, which you must haggle like mad for. The whole process takes several hours.

It's been amazing so far, certainly a challenge, but incredibly rewarding. Every small victory feels so good. I'm really just so happy to be here.
at 6:06 AM 3 comments:

New Year's Fair at HePingMen, which is a block from our hutong hostel. Just amazing. Yes, I ate scorpions and grasshoppers, Tibetian antelope, mysterious fruit, etc. 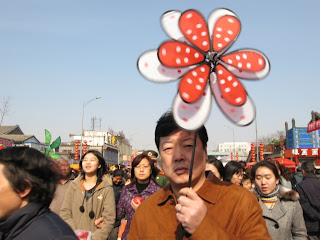 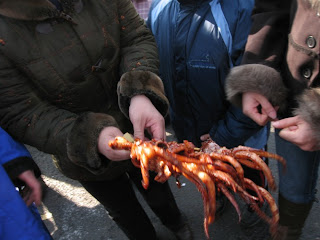 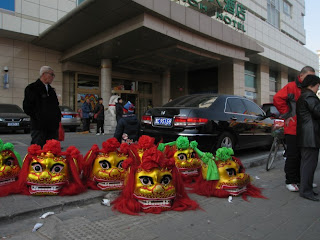 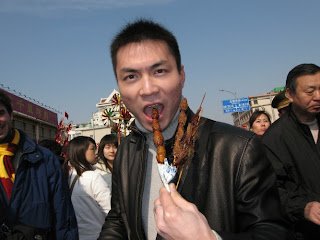 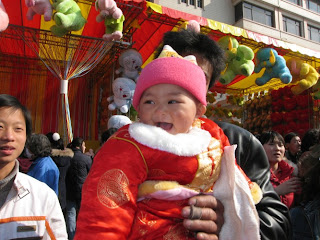 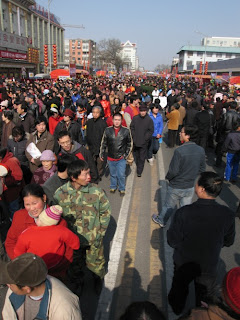 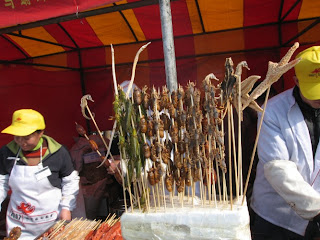 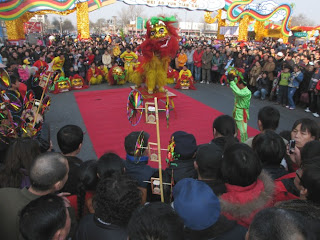 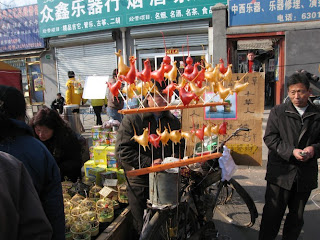 Work out! (The sign in the background says 我爱我家; I love my home.) The Chinese are INSANE with their fireworks, and some guys actually placed bottle rocket types on their side so they shot randomly into crowds of people. (honestly) The air was hot with smoky, gunpowdery smog which stung your eyes and made you cough. It was INCREDIBLE, more like a war zone than anything else, with MANY ambulances running by and police and military men constantly on alert. There were basically six types of fireworks:

1) Very Chinese firecrackers that are red little sticks of dynamite on a string that pop extremely loudly with just a few sparks and last a LONG time.
2) Bottle rockets that people hold really casually or stick into the ground.
3) Beautiful long strands on a single string that wave vigorously while they burn and let off incredibly white light.
4) Small mini bombs that simply EXPLODE very, very loudly and scare the shit out of you.
5) "Traditional" style firework cannons that burst in the air.
6) Horrifying, whirling flaming balls that shoot straight at you and make everyone run and scream in terror.

Pictures will be SLATHERED all other this blog, but right now, this computer is too slow to handle any uploading. Tomorrow I'll try to figure it all out.
at 2:02 AM No comments:

It's around 5:30am here, and I'm sitting in the small internet room in our hostel with four or five very drunk Swedes, Norwegians, Dutch, etc. types chain smoking and slurring loudly next to me. Everyone else is sleeping.

I'm starting to feel less exhausted, and yesterday, our first full day, was incredibly long even though we ended up going to sleep before 8. We went to Behai park, ate fried lamb at a Chinese Muslim resturant, Saul had a really good corn popscicle, had a driver who got completely lost five or six times, drank many a Qingdao, walked aimlessly through the hutong... Since New Year is coming up, a lot of people were making fish dishes outside their homes, with one guy bashing a fishes' head in with his fist while some other guy laughed since the fish kept slipping away.

We're all a bit restless, so later today we're going to see this apartment in Haidian, which is the university district. Also, we are going to see Wudaokou, which is a neighborhood in Haidian that is supposedly pleasant and cheap and has a small foreigner community, and see if this area might be good for us. Silvia might be talking to a school tommorrow, but I'm most likely waiting a few days until Spring Festival is over.

Pictures will be posted soon! Check back!
at 5:28 AM 2 comments: 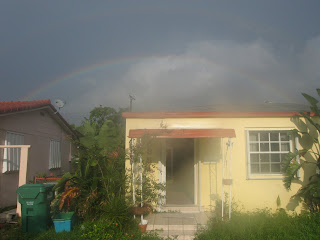 postcards
Anyone who'd like a postcard from Beijing, post a comment with your address and I'll send one out to you. I need to make a sort-of phonebook, regardless, so this will do the work for me and in return you'll get a dusty, well traveled thin slab of cardboard printed matter with images upon one side, and touristy "we're having a great time!" style comments on the other. Perfect!
at 1:54 AM 8 comments: 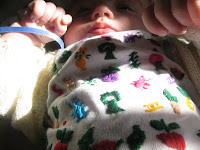 moving... Beijing is going to be my new home for an indeterminate amount of time. I'm going to miss everyone terribly. I'll be gone in a week. Anxious, worried, excited.