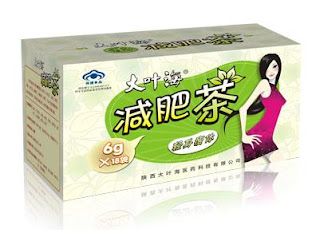 Weight loss tea
Chinese, like Americans, love diet plans.  Average diets are much more oily and meaty than previous years, so Chinese are bulking up.  To combat this, there are many new products on the market, many ridiculous, designed to help you lose weight.
Weight loss teas (减肥茶，or literally "lose/subtract weight tea") are a common, sane form of weight control and look much like Western bag teas, with a Western price to match. All of the ingredients in such tea are very Chinese, and are traditionally drank without any weight loss goals in mind.  (Strangely, all ingredients in these teas are easily bought for much cheaper at local markets or drugstores here.)
From experience, these tea ingredients are great for digestion, helping upset stomachs, relieving bloating and keeping regular.
at 3:41 PM No comments: 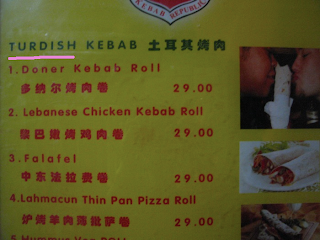 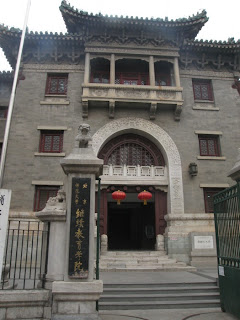 北京师范大学辅仁郊区
Beijing Normal University Furen campus
---
I'm teaching a few classes at this beautiful institution this semester.  The campus itself has an incredible history: it was part of a massive mansion built in the mid 18th century by a possibly corrupt minister named He Shen. He was later executed and the entire mansion was passed amongst royal family until it was finally bequeathed nearly one hundred years later to Prince Gong, the then emperor's brother.
In 1921, part of the compound was bought by the Catholic Church and made into Furen Catholic University.  During the cultural Revolution it became, of all things, an air conditioning factory. (If you look carefully, you'll notice rubbed out slogans exalting Mao painted on the facade.
Now Fu Ren campus is completely seperated from Prince Gong's mansion, which is still mostly intact and protected.  The campus is shabby, at best, but glimmers of it's past glory can be seen.
Anyway, my students are fun and have a high English level!  Looking forward to the semester.
More pictures... 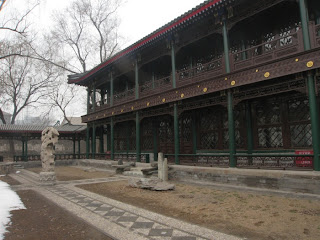 A restored, but unused, building facing a sparse rock garden. 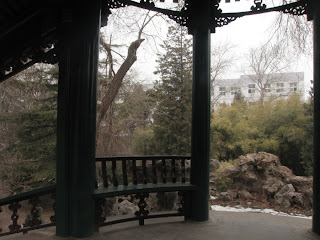 A pretty pavilion set amongst a garden.
at 2:58 PM No comments: 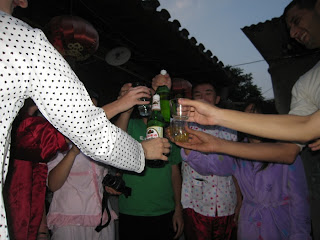 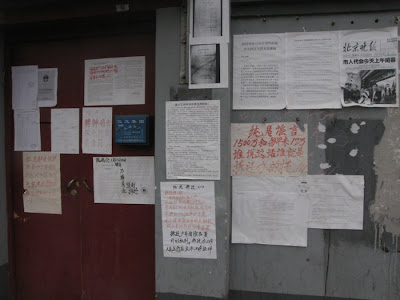 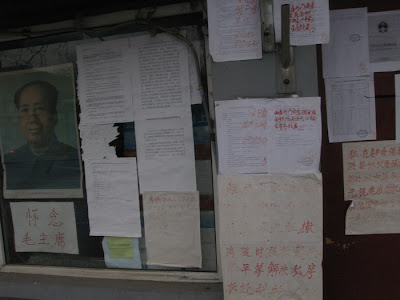 Protesting, Chinese style
---
Walking home from work a couple of days ago I discovered these signs of political protest on a shop around Qianhai.  What I could make out is a familiar horror story in contemporary China; the forced reclaiming of old houses to make way for new construction.  Although the government gives residents cash for the demolished house, many times the house in question is so undervalued that residents cannot afford an apartment in Beijing's inflated real estate market.
Among the cluster of signs above, the most notable are the characters below Mao's portrait that read "怀念毛主席," or "yearning for Chairman Mao."  Nearly all such silent, passive-aggressive protest evokes Mao's name, something that is nearly as unheard of in contemporary China as protesting in the first place.  To many Chinese, Mao is the symbol of an earlier, backward time, even if his face is emblazoned on all currency.
This is not the first time I've noticed this kind of protesting in Beijing; there is also a shop near Gulou located directly next to a large military headquarters with a sign that reads in English: "FOREIGN JOURNALISTS, PLEASE HELP."  They also prominently feature a portrait of Mao in the window.
How am I implicated by living and working in such a place?
at 6:37 PM No comments: 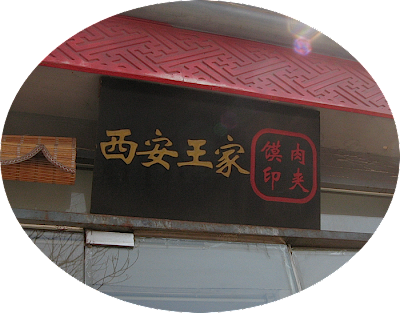 With only a handful of tables and minimal decoration, this easy to pass up, ubiquitous looking hole-in-the-wall serves snacks specific to Shaanxi as well as other house specialties. Their pork and green pepper stuffed sandwiches (肉夹馍) are the best outside of the city that bears their name with homemade buns and perfectly fatty, tasty filling. Also try their potato salad (土豆沙拉); Creamy and fluffy with shredded daikon and carrot, it's frequently ordered and sometimes sold out. Other snacks to try include spinach in ginger juice (姜汁菠菜), their specialty "omelet" (鸡蛋方) and a variety of cold noodles.

It's usually packed for lunch, so be prepared to share a table with strangers if you come alone.

From 北新桥 exit B head north along 雍和宫大街 for around 100 meters. The restaurant will be on your right side.
at 8:25 PM 1 comment:

Labels: around Beijing, food
If say something malevolent or gossip about a person not present you can say:

The literal translation is "Heaven knows, earth knows, you know, I know." This implies that although there are four "people" present, it's unimportant because it'll be kept a secret.
at 6:18 PM No comments:

This Sunday, the gang and I had a busy day at the 798 art district. Highlights: 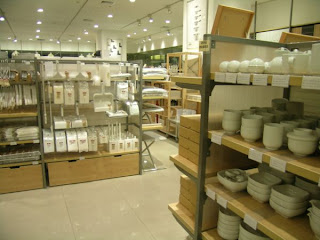 MUJI 無印良品
Beijing is now overrun with the Japanese "lifestyle store" MUJI, which is common in Japan but high luxury in Beijing. This is where you can spend 65RMB ($9.50) on a perfectly simple, unfired clay incense holder. It's like IKEA, but much more desirable.

It's a bit worrying that a two floor superstore selling, among other things, hand brooms and lint rollers at literally ten times the price in regular Chinese stores, can do successful business. How wide is this income gap?

Language note: The Japanese name can be read in Chinese perfectly with the exact same meaning. In simplified characters, it's 无印良品, or "unlabeled" (无印) "fine products" (良品). 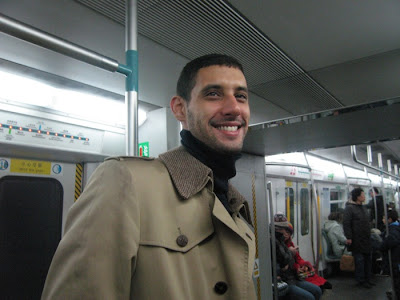 Ariel on the subway
爱你帅哥 <3 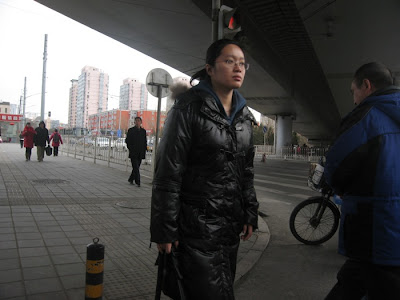 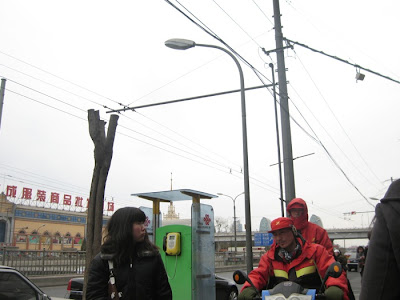 顺路。
- Two recent photographs taken on the way to other places. -
at 7:03 PM No comments: 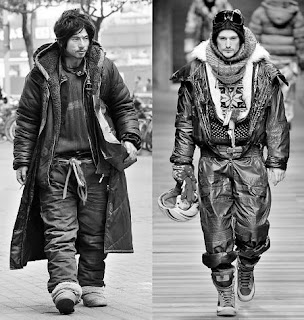 One of the more interesting recent internet celebrities in China is "Brother Sharp," a possibly mentally ill, homeless man from Ningbo. He's been praised as a Bohemian style icon, wearing clothes reclaimed from the trash, having unkempt hair and a certain style, attempted by others using gobs more money.

The whole affair is pretty telling; the haves try to copy the "look" of the have-nots. In China specifically, there is no real history of thrift stores or punk music or any kind of fashion rebellion in this way. Any attempt is usually a kind of elaborate, expensive, safe, imported costuming, so "Brother Sharp" actually doing it is exciting, albeit he's unaware of the situation. The inevitable backlash, a "Brother Sharp" make-over and intervention, is already in the works. 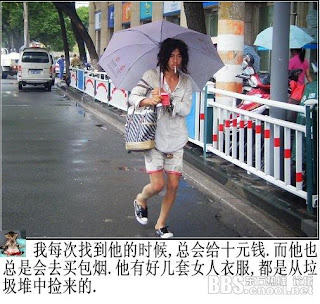 The Chinese reads "Everytime I see him, I give him 10RMB, which he uses on cigarettes. He also has women's clothing, all of which come from the trash." 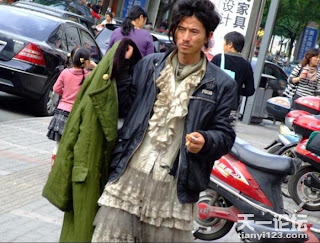 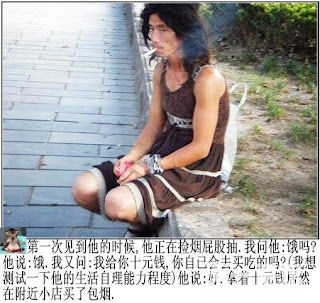 The Chinese reads: "The first time I saw him, he was collecting cigarette butts to smoke. I asked him, 'Are you hungry?' He said, 'Yes.' Then I asked, 'If I give you 10RMB, can you go buy food yourself?' (I wanted to see if he could provide for himself.) He said, "Alright, but I'm actually going to use this money to buy cigarettes." 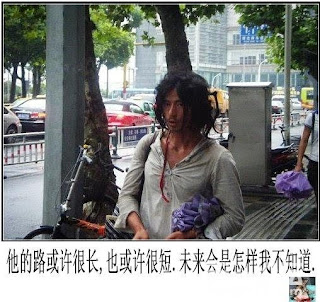 The Chinese reads "Perhaps his road is long, or perhaps it's short, but his future is uncertain."
at 9:18 AM No comments:


(A translation of an article about a local artist. His photographs are commonly found in Beijing galleries.)
at 8:49 AM No comments: 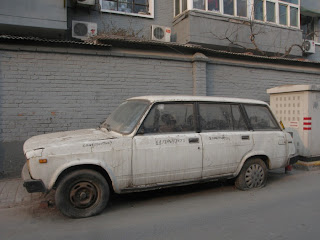 An old, abandoned Lada.
(Xisi district)
西四区
The West and South of Beijing are nowhere near as wealthy as the east and parts of the suburban north. Somehow these portions, notably the center west part, have been left behind dramatically in economic development.
Xisi is a surprisingly depressed area not far from my home in distance, but much further away in other ways. Some streets and hutong look unchanged for many years, and there are several temples and markets overflowing onto the streets selling mostly construction equipment and lighting supplies. The beautiful, but unkempt, "white pagoda temple" is nearby, so you can see nuns occasionally walking the streets.
at 4:09 PM No comments:

Lots of issues with internet usage in China... I'm testing a site that allows me to post through a 3rd party program. Hopefully this works.

UPDATE: Due to recent blocks, we've paid for a private VPN located in America. We can use everything and it's much faster and easier than it ever was before. (Why didn't I do this before?) 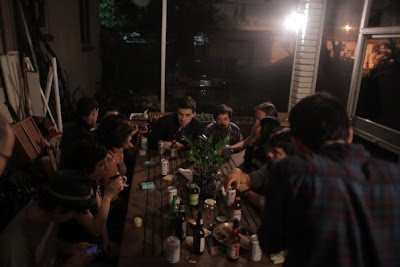 BBQ night
---
(Thanks for the picture, Alesh)


Something wonderful Ariel has found... 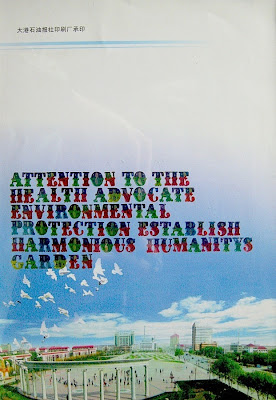 (This is a collage using stickers on a found booklet from China Oil. The phrase comes from a poorly translated motto outside of a large office building.)

ALSO: I've updated my painting site.
at 8:00 AM No comments: