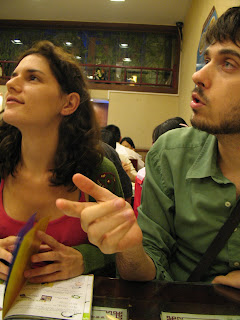 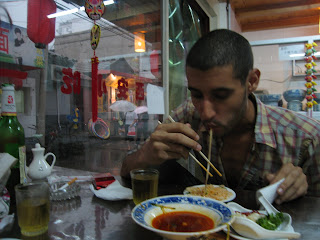 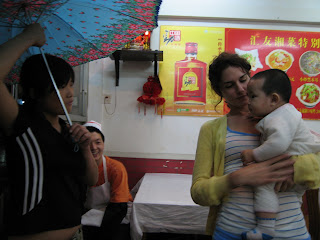 It's colder today. I borrowed Ariel's grey sweater with thin, Lifesaver™ candy stripes and treked, a little late, to work. Outside of the Dongzhimen line 13 subway station a gaggle of grandmas were fan dancing in chaotic rhythm to the sound of crackling speakers. Because of the morning rush, there are always street vendors selling onion pancakes, plain steamed buns and boiled soymilk. After electromagnetic fare machines, tight spaces, halitosis, one episode of This American Life and eleven stops, I'm at work.


Power outage. The whole work day was spent in the dark. No one seemed terribly worried, but there was a fire in the "control room" (or whatever) The smoke was seen outside the building.
I'm writing. Subjects like indian casinos, conversations between co-workers, yard sales, Alaska and Hawaii, fabricated restaurant conversations, the history of LA (for a few students traveling there), geography, the Chinese in America, pot lucks, old cultural fads like paint-by-numbers, photo booth pictures, state parks, Wiki-fueled briefs on the American judicial system, immigration, small religious groups, etc. (All in the name of learning English, of course.)
at 6:46 PM

Yesterday was a great day, Isa and Kaspar came over to talk and eat cheese. The kids took a bath together and kaspar looked like such a big boy.
Saturday I am starting a craft circle, like a 50's circle of women, I'll report later.
Chad is soon to deposit your check so no worries.
How is everything? happy day silvi!!! i love you so much!

how is everything guys, can you send me the word in chinese that describes the noodles I eat at the dumpling place? maybe they can make them somewhere else or I find a recipe!
kissses!
C